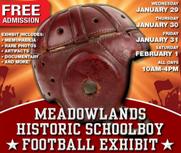 The Meadowlands Museum – January 29 through February 1

The display at The Meadowlands Museum, 91 Crane Avenue, Rutherford, will include an amazing Exhibit Room plus a Media Room where visitors can watch on a wide-screen TV, videotaped interviews with great NFL and Hall of Fame players who came from Meadowlands area schools.

The exhibit begins on Wednesday, January 29th and runs through Saturday, February 1st from 10am to 4pm. It will be also be available on Wednesdays and Saturdays through the month of February. Admission is free.

SHUTTLE SERVICE AVAILABLE to the Meadowlands Museum from the Kip Center Parking Garage, located at the corner of Kip and Ames Avenues.  The Rutherford Shuttle Bus will run approximately every 30 minutes between the hours of 10am and 4pm from January 29th through February 1st.  Parking will be reserved on the upper level of the parking garage for MMus patrons.